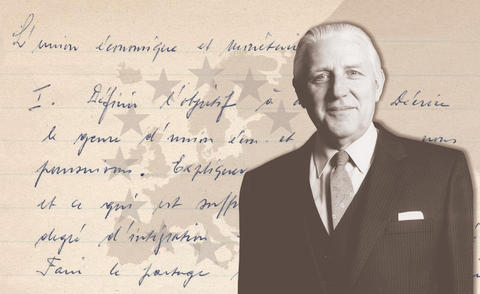 The CVCE has recently published a research corpus that presents the results of the first stage of its ‘Pierre Werner and Europe' project on the European vocation and achievements of Pierre Werner, a former Prime Minister, Finance Minister and Foreign Minister of Luxembourg, unanimously recognised as one of the key figures behind Economic and Monetary Union.

Based on a thorough exploration of the Pierre Werner archives, which have been opened for the first time for research purposes, and also on other relevant archives — both Luxembourgish and international, public and private — containing multimedia material in several languages, this corpus sheds light on the alchemy of the Werner Report and the mindset in which it was developed. Previously unpublished documents have helped clarify the varied, nuanced role of Pierre Werner and his personal contribution to the development and adoption of the stage-by-stage plan — on a theoretical, methodological and political level — in the context of his European achievements as a whole.

The corpus contains a comprehensive, varied selection of primary sources and related resources as well as a detailed analytical study, which provides a new interpretation of some previously unexplored material. This corpus offers a ‘rereading', a fresh look at the Werner Report, retracing the context and historical background in which the report was drafted and examining the work of the Werner Committee. It particularly highlights the impact of the Werner Plan in the future development of Economic and Monetary Union. The study is accompanied by a list of references cited by section, as well as a list of key figures with brief biographical details, a comprehensive bibliography and a chronology.

This digital research corpus is geared towards the academic community and intended to be used for in-depth research. It has gone through a peer review process by a steering committee of external experts composed of René Leboutte, Professor in Contemporary History and holder of the ad personam Jean Monnet Chair in European Integration History at the University of Luxembourg; Ivo Maes, Senior Adviser for Historical Studies in the Research Department at the National Bank of Belgium and Professor and holder of the Robert Triffin Chair at the Institute of European Studies of the Université catholique de Louvain; and Sylvain Schirmann, Professor at the University of Strasbourg, holder of a Jean Monnet Chair in European Integration History and Director of the Institute of Political Studies at the University of Strasbourg. The corpus has been published following the unanimous positive evaluation of the committee.

The digital research corpus on the Werner Report currently contains 632 documents, 160 photos, 46 video interview extracts, 3 audio extracts and 19 cartoons. The entire corpus is available in full in French and English.