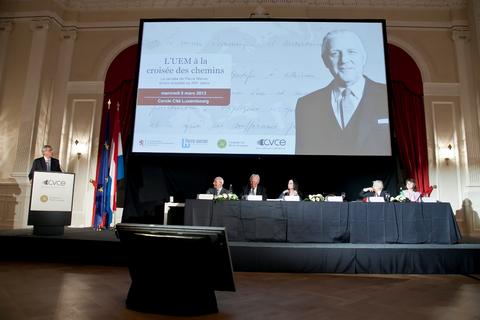 On 6 March 2013, the CVCE, in partnership with the European Merit Foundation, held a conference at the Cercle Cité in Luxembourg City entitled ‘EMU at the crossroads. The relevance of Pierre Werner's thinking in the 21st century', to mark the publication of the CVCE's research project on the ideas and achievements of Luxembourg Prime Minister Pierre Werner in favour of European economic and monetary integration in the 1970s. The event was supported by the Pierre Werner Foundation.

After an opening address by Professor René Leboutte, Chairman of the CVCE's Committee of Experts, proceedings were chaired by Dr Susana Muñoz, a member of the CVCE's Management Committee. Opening the debates, Elena Danescu, Doctor of Economics and Researcher at the CVCE, presented the results of her research in the Pierre Werner family archives, to which the CVCE has been granted privileged access via a partnership agreement with the Werner family. This research, based on correspondence, personal notes, unpublished reports, audiovisual archives, etc., sheds new light on Pierre Werner's reflections and on the economic and monetary concerns that prevailed at the time. It demonstrates the relevance and modernity of the recommendations in the Werner Report of October 1970, the first official report on the establishment by stages of an economic and monetary union in the European Community. At a time when the euro zone is considering how to strengthen Economic and Monetary Union, we can note that the 1970 Werner Report already advocated the creation of a ‘centre of decision for economic policy' that was to be ‘politically responsible to a European Parliament', and a ‘Community system for the central banks'.

This research is accessible on the CVCE's website (www.cvce.eu/recherche/projet-werner). It is presented as a research corpus that includes an analytical study accompanied by a collection of 650 written documents, 160 photos and 46 interview excerpts. It is available in French, English and German.

In his lecture ‘The road to an economic and budgetary federation in Europe', Jean-Claude Trichet, Honorary Governor of the Banque de France and former President of the European Central Bank, emphasised that, unlike the financial crises in the 1980s and 1990s, the crisis that began in 2007 had its epicentre in developed economies. The global integration of the financial markets meant that the crisis soon spread from the United States to Europe. The cost of government interventions designed to prevent a collapse of the European financial system put many countries in an even more precarious budgetary situation. Jean-Claude Trichet identified six weaknesses that caused the crisis to deepen in the euro zone: poor application of the Stability and Growth Pact, a failure to correct the macroeconomic imbalances that emerged between Member States, the absence of a banking union, the absence of a crisis management mechanism, the absence of a unified market for services, and insufficient structural reforms in the Member States.

‘We need to create a real single currency area'

Jean-Claude Trichet observed that the crisis has led to major developments in the euro zone: economic governance has been thoroughly reformed with the adoption of the ‘Six-Pack' (a series of five EU regulations and a directive). Solidarity instruments for the euro zone have been adopted since summer 2010, most recently the European Stability Mechanism, with a subscribed capital of €700 billion.

Further improvements still need to be made in the area of crisis management. Jean-Claude Trichet put forward the suggestion that, in ‘absolutely exceptional cases', the EU could exercise budgetary authority over a country in serious financial difficulties. This temporary transfer of political responsibility would have to comply strictly with the principle of subsidiarity and democratic principles. To give political legitimacy to such a development, decisions would, in the final analysis, have to be taken by the representatives of the citizens of the euro zone.

Jean-Claude Juncker, Prime Minister of Luxembourg and President of the Eurogroup from 2005 to 2013, gave a lecture in which he examined ‘Europe beyond the euro'. The global environment is rapidly changing: given its geographical and demographic profile, Europe is merely a ‘small continent' in the 21st century. It is therefore not in the interest of Europe and its citizens to harbour internal divisions — on the contrary, their guiding principle should be to build unity. This unity is not limited to material aspects such as the single market or the single currency: Europe is a project which also has a meaningful political dimension. The European continent has been a theatre of conflict as well as movements for peace. The peace that currently reigns between the countries of Europe remains fragile and requires unceasing efforts and vigilance. The demons of the past did not disappear at the end of the Second World War; we need to be unstinting in our efforts to explain Europe to future generations.

‘We need to teach Europeans to take pride in Europe'

The Prime Minister recognised that the austerity policies pursued across Europe have undermined the European social model. But he called for the continued application of stringent policies and the implementation of structural and macroeconomic reforms.

‘We can't tackle the deficit by continuing to accumulate deficit'

According to Jean-Claude Juncker, the future of Europe should not be reduced to the concept of a United States of Europe, an idea that disregards the attachment of European citizens to their respective countries. But in the Prime Minister's view, monetary integration should be backed up by greater unity in other areas. If it is to appear as a united entity, Europe should establish a real army, a diplomatic corps and a single representation in international organisations such as the UN. These major steps require time and patience.