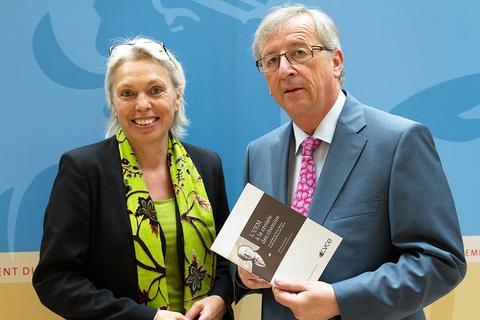 On 20 June 2013, the Director of the CVCE, Marianne Backes, presented Luxembourg Prime Minister Jean-Claude Juncker with the proceedings of the conference ‘EMU at the crossroads. The relevance of Pierre Werner's thinking in the 21st century'. This conference, organised by the CVCE in partnership with the European Merit Foundation at the Cercle Cité in Luxembourg on 26 March 2013, was an opportunity to present the CVCE's research on the ideas and achievements of Luxembourg Prime Minister Pierre Werner in favour of European economic and monetary integration in the 1970s.

The event, attended by more than 300 figures from the university, diplomatic and political arenas, as well as from European and international economic and banking circles, featured lectures by two renowned speakers: Jean-Claude Trichet, Honorary Governor of the Banque de France and former President of the European Central Bank, and Jean-Claude Juncker, Prime Minister of Luxembourg and former President of the Eurogroup. The two speakers shared their own thoughts on potential scenarios for the development of Economic and Monetary Union and for the European integration process in general, and outlined future prospects. At the end of the event, Jean-Claude Trichet was awarded the Collar of European Merit by Prime Minister Jean-Claude Juncker and was presented with the Diploma of European Merit by Jacques Santer.

This event, focusing on the reflections of Pierre Werner, whose centenary will be celebrated later this year, was an invitation to look back, to improve our knowledge of past events so that we can understand the present and build the future.

The conference proceedings reflect this memorable evening devoted to Europe and its leading players, past and present; they shed new light on the European plan for economic and monetary integration and aim to serve as a source of inspiration to overcome the current challenges in the building of a united Europe.

The first stage of the ‘Pierre Werner and Europe' research project particularly focuses on the plan for the establishment by stages of an economic and monetary union (more widely known as the Werner Plan), drawn up by a group of experts chaired by Pierre Werner and officially presented on 8 October 1970 in Luxembourg. This work, directed by Elena Danescu, Doctor of Economics and Researcher at the CVCE, is presented on the CVCE website (www.cvce.eu/recherche/projet-werner) as a research corpus that has undergone evaluation by a peer review committee. It is based on a thorough exploration of the Pierre Werner family archives (mostly unpublished), to which the CVCE has been granted privileged access. The corpus includes a detailed analytical study accompanied by a collection of 650 written documents, 160 photos and 46 interview excerpts. It is available in French, English and German.

The ‘Pierre Werner and Europe' research project enjoys the support of a patronage committee composed of eminent figures from Luxembourg and Europe and chaired by Luxembourg Prime Minister Jean-Claude Juncker.

The conference proceedings are available on request (info@cvce.eu) or can be downloaded from the CVCE website.