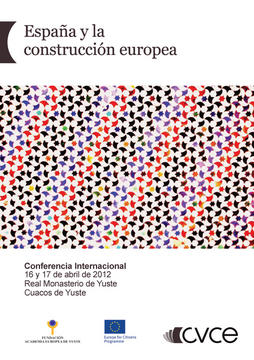 The CVCE recently organised an international conference entitled ‘Spain and the European integration process' in collaboration with the European Academy of Yuste Foundation. The conference took place on 16 and 17 April 2012 at the Royal Monastery of Yuste.

This event was organised in connection with the CVCE's research project ‘Spain and the European integration process', directed by Dr Cristina Blanco Sío-López, Researcher in European Integration Studies at the CVCE. This research project is devoted to the historical relationship between Spain and Europe in a broad sense from the end of the Second World War to the present day. The project focuses on the relations of Spain's various political and socio-economic players with the European Union and their interactions with other European organisations.

The conference began with a keynote speech by Carlos Closa (IPP-CSIC, Global Governance Programme RSCAS-EUI) and also included a round table with Spanish figures who have played a major role in the European integration process, such as José María Gil-Robles Gil-Delgado and Enrique Barón Crespo. These two former Presidents of the European Parliament have also granted interviews to the CVCE as part of its ‘Oral history of European integration' project.

The conference reflected and expanded the project's main lines of research by means of the following themed panels, which were followed by a debate:

The research papers presented during the conference constituted an example of interdisciplinarity within the field of European integration studies, with contributions from experts in contemporary history, European Union law, economics and political science. The event offered experts and young researchers alike an opportunity to exchange ideas, thus enhancing the development of new initiatives in this domain.

This event represents a contribution to research and debate in this field, providing valuable feedback for the project results, which will be made available via the publication of the conference proceedings and the dissemination of other content on the CVCE website.