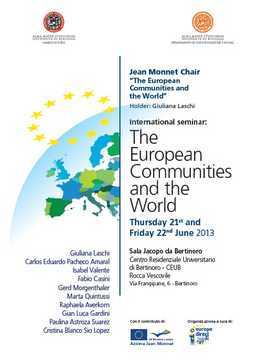 On 20–21 June 2013, Dr Cristina Blanco Sío-López, Researcher in European Integration Studies at the CVCE, took part in the Jean Monnet International Conference ‘The European Communities and the World', organised by Prof. Giuliana Laschi, holder of the Jean Monnet Chair ad personam at the University of Bologna and Visiting Researcher at the CVCE in April and May 2013. The conference, which was held at the Centro Residenziale Universitario di Bertinoro (University of Bologna), explored the changing meaning and evolution of the EU's international relations and the links between European and national foreign policy lines. Cristina Blanco Sío-López presented her research paper ‘Instrumental bridges or fruitful ties? Spain's role in the consolidation of a EU-Latin America partnership', as part of the ongoing results of the CVCE project on ‘Spain and the European integration process'. The conference was also the closing event for the MA in European Studies at the University of Bologna.

The programme of the Jean Monnet International Conference can be consulted here: