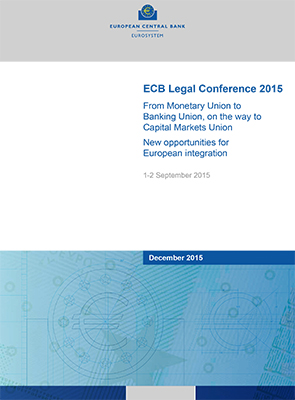 On 1 and 2 September 2015, Frédéric Allemand, European Integration Studies Coordinator at the CVCE, spoke at the international conference ‘From Monetary Union to Banking Union, on the way to Capital Markets Union. New Opportunities for European Integration’, organised by the European Central Bank.

The conference proceedings, published on 18 December, contain an enhanced version of Frédéric Allemand’s presentation on the ECB, the Single Supervisory Mechanism and differentiated integration. The publication is available for download on the ECB website in PDF and ePub format.

In his contribution, Frédéric Allemand describes how the level of differentiated integration between the Member States in relation to the euro leads to legal complexity with regard to the ECB’s rights and obligations. The ECB has powers whose scope does not extend beyond the borders of the euro zone. The reforms taken to strengthen financial stability within the European Union as a whole are in direct conflict with the question of differentiation and the limited powers of the ECB. This difficulty is overcome by means of complex technical solutions which result in legal uncertainty. The author particularly examines the missions of the ECB outside the European Union framework (in connection with the European Stability Mechanism) or within the European Union but applying to all the Member States (the European Systemic Risk Board and the Single Supervisory Mechanism).