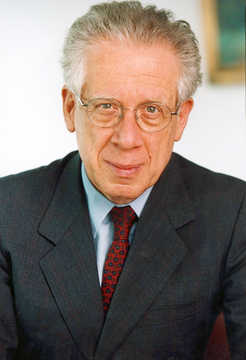 The CVCE, in cooperation with ‘Notre Europe – Institut Jacques Delors' and the National Foundation for Political Science (FNSP-Sciences Po), has developed a file on Tommaso Padoa-Schioppa (1940–2010) with the aim of providing new insight into his personality, his approach and his contribution to European and international economic and monetary affairs over the past 40 years.

As an official at the Bank of Italy from 1968, then Director-General for Economic and Financial Affairs at the European Commission (1979–1983), Deputy Director General at the Bank of Italy (1984–1997) and a member of the first Executive Board of the European Central Bank (ECB) (1998–2005), Tommaso Padoa-Schioppa played a leading role in the definition of EMU and the creation of the euro (particularly in drawing up the Delors Report), and also in the establishment of the ECB and the consolidation of its role in the euro zone.

This file contains 12 interviews with eminent European figures, all of whom worked closely with Tommaso Padoa-Schioppa during the various stages of his career. These eyewitnesses all agreed to share their memories with us to pay tribute to a man who, for many of them, had become a close friend. We would particularly like to extend our thanks to them for their cooperation.