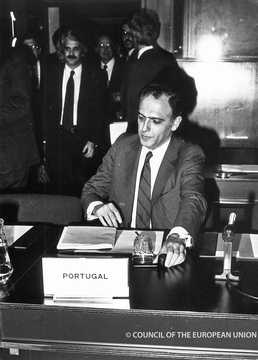 Date and place of birth
20/02/1942 in Lisbon (Portugal)
Nationality
Portuguese
Offices held
Director of the Statistics and Economic Research Departments at the Bank of Portugal (1974–1975)
Portuguese Ambassador to Bonn (1975–1979)
Professor and Director of the Institute of European Studies at the Catholic University of Portugal (1980– )
Ambassador, Head of Portugal’s Mission to the European Communities in Brussels (1979–1983)
Minister for Finance and Planning of the ninth Constitutional Government (1983–1989)
Economic Consultant at the Bank of Portugal (1985–1989)
Professor at the Institute of Political Studies at the Catholic University of Portual (1997– )
Chairman of the Board of Governors of the Portuguese–Spanish Foundation (2000– )
Representative of the Portuguese Government in the European Convention (2002–2003)