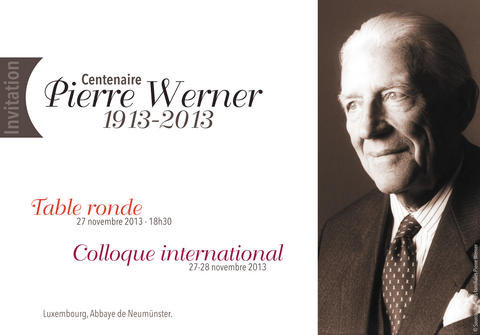 On 29 December 2013, Pierre Werner would have celebrated his 100th birthday. To commemorate this occasion, a series of events will be held at the Abbaye de Neumünster to pay tribute to this eminent Luxembourg politician who left his mark on the country's future and on the European integration process. Werner worked tirelessly to bring his ideas to fruition — from the economic diversification of Luxembourg and its consolidation as an international financial centre to the development of a policy for satellite telecommunications and the introduction of Economic and Monetary Union in Europe — becoming a source of inspiration for future generations. The CVCE will be analysing the work and European achievements of Pierre Werner through a round table and an international conference.

The full programme of all the events is available here.


Round table with key players and eyewitnesses — ‘Pierre Werner: accounts of a European vocation'

On 27 November 2013, a round table will be held with participants from Luxembourg and Europe, including members of the Werner family, whose accounts will shed light on Pierre Werner and his personality, views and actions. The event will open with a video statement by José Manuel Durão Barroso, President of the European Commission.


International conference — ‘Pierre Werner, a vision for Europe: his approach, action and legacy'

The CVCE is currently carrying out a large-scale project on the European achievements and approach of Pierre Werner, based primarily on the thorough exploitation of the Werner family archives, which have been opened for the first time for research purposes. In this context, an international conference will be held on 27 and 28 November 2013, bringing together renowned experts and researchers and major players in economic and monetary affairs to speak on the European achievements of Pierre Werner and their relevance in the 21st century. The opening lecture will be given by Prof. Hans Tietmeyer and the closing lecture by Prof. Philippe Maystadt.