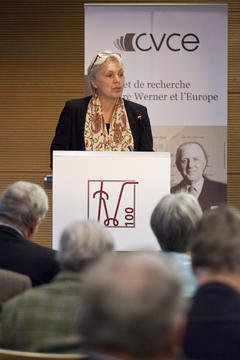 On 29 December 2013, Pierre Werner would have celebrated his 100th birthday. To commemorate this occasion, a series of events were held at the Abbaye de Neumünster to pay tribute to this eminent Luxembourg politician who left his mark on the country's future and on the European integration process. Werner worked tirelessly to bring his ideas to fruition — from the economic diversification of Luxembourg and its consolidation as an international financial centre to the development of a policy for satellite telecommunications and the introduction of Economic and Monetary Union in Europe — becoming a source of inspiration for future generations.


Round table — ‘Pierre Werner: accounts of a European vocation'

On 27 November, the CVCE and its partners — the Pierre Werner Institute, the European Merit Foundation, the Cercle Pierre Werner and SES — organised a round table entitled ‘Pierre Werner: accounts of a European vocation'. This round table was opened by a video message recorded by José Manuel Barroso in which he spoke of Pierre Werner's European career and the balance he was always able to achieve between his work in Europe and his commitment to his native Luxembourg. Mr Barroso also thanked the CVCE for its work on Pierre Werner's life and achievements.

The round table was moderated by Danièle Fonck, Managing Director of Editpress and Editor-in-Chief of the Tageblatt, and included contributions from Marie-Anne and Henri Werner, Pierre Werner's son and daughter; Jacques Santer, Honorary Minister of State and former President of the European Commission; Colette Flesch, former Minister and Deputy Prime Minister; Luc Frieden, Finance Minister; Sir Brian Unwin, Honorary President of the European Investment Bank; and René Steichen, Chairman of the Board of Directors of SES, who exchanged their memories about the personality and work of Pierre Werner. At the end of the round table, Claude Strasser, Managing Director of POST Luxembourg, presented the commemorative stamp honouring Pierre Werner.

The recording of the event will be available on the CVCE website from mid-December.


International conference — ‘Pierre Werner, a vision for Europe: his approach, action and legacy'

On 27 and 28 November, renowned experts and researchers and major players in economic and monetary affairs met to speak on the European achievements of Pierre Werner and their relevance in the 21st century. After an opening address by Martine Hansen, Minister for Higher Education and Research, and an introduction to the theme of the conference by Dr Susana Muñoz, Head of the European Integration Studies Department at the CVCE, Prof. Hans Tietmeyer, Honorary President of the Bundesbank and former member of the Werner Committee, gave the opening lecture. The contributions were divided into four themed sessions:

1. Pierre Werner, a life dedicated to the European ideal

2. The Werner Report: ideas, initiatives and challenges for a Europe built through currency

3. From the Werner Report to the Delors Report: progress towards Economic and Monetary Union

4. Challenges and prospects for Economic and Monetary Union

The conference was closed by Prof. Philippe Maystadt, Belgian Minister of State and Honorary President of the European Investment Bank.

The conference was organised by the CVCE in close cooperation with the Pierre Werner Foundation, the University of Luxembourg, the Triffin International Foundation and the European Commission Representation in Luxembourg.

The proceedings of the conference will be published in 2014 as part of the CVCE's ‘Pierre Werner and Europe' research project.