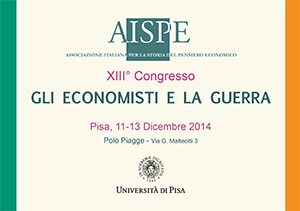 Elena Danescu, a Researcher at the CVCE, recently took part in the XIII Conference of the Italian Association for the History of Economic Thought (AISPE), which was held from 11 to 13 December 2014 at the University of Pisa. Elena Danescu presented her paper ‘Pierre Werner: A Visionary European and Consensus Builder' in the session ‘The Architecture of EMU'.

This conference participation, associated with the Pierre Werner and Europe research project, is one of a series of events involving the co-authors of the British Academy publication ‘Founders of the Euro: Intellectuals and Policy Makers in the Making of Economic and Monetary Union'. This book, edited by Professors Kenneth Dyson and Ivo Maes and scheduled for publication in 2015, will examine the role of 12 key figures in Economic and Monetary Union, including Pierre Werner.